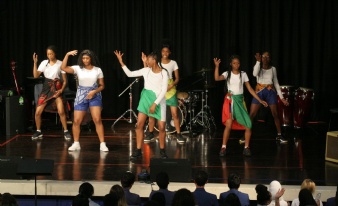 Take a look at everything that took place during Arts Week 2019.

Arts Week 2019 started with our annual Orchestra Workshop in which instrumentalists of all grades joined together to learn and perform an arrangement of 'Viva La Vida' by Coldplay. The Music workshops continued with our woodwind teacher leading a jazz workshop focusing on improvisation. Meanwhile, Mr Vanger our Performing Arts technician led a group of Year 7 and 12 students in a Soundscape project. The students learned about how to create surround sound (just like in a cinema) and then recorded their own nature sounds in the KS4 playground that they later manipulated using music technology to create some very impressive soundscapes!

In Drama students took part in a Commedia Dell'arte workshop, looking at the tradition of Italian theatre. Other drama activities included a Physical Theatre workshop in the auditorium and two sessions for the Y8 students who have chosen to study Drama in Y9 focusing on devising theatre around the topic of social media.

At lunchtime, the Art team facilitated 'The Big Draw' in which students were invited to collaborate and draw together in the KS3 playground.

On Tuesday the Y10 Drama class took part in a 'devising in a day' project. The previous week the students had visited the Victoria and Albert Museum to take pictures of different displays and artifacts that related to their given theme 'Time Changes Everything'. On the Tuesday of Arts Week students collaborated in groups to create their own 8-minute pieces of theatre based on their theme. The final performances were very impressive!

Y8 Arts students were treated to a visit to the National Portrait Gallery to do some observational drawing and the choir took part in a session with a guest choir director who taught them some funky harmonies to 'How Far I'll Go' from the film 'Moana'.

Y9 Drama students completed their Bronze Arts Award on Wednesday, starting with learning the skill of Puppetry as their 'Part A'. Later in the day they taught Y7 students new Drama skills and ended the day by watching a performance from Page To Stage drama club. The performance was outstanding and the Performing Arts team were very impressed with the standard that the students produced.

The whole of Y7 took part in 'The Big Sing' in the auditorium with our choir director for a double period. The students sang with enthusiasm and energy and at the end of the session, Challenger were named the winning house! Singing activities continued into the next lesson with a group of students who had signed up to learn some vocal skills from Mr. Chadda.

The final day of Arts Week 2019 started with the reveal of the art installation that Y7 students had been working on at lunchtime in the courtyard near reception.

Despite plans to be outside, the rain in the morning meant that our annual music festival 'Ashtival' had to move to the auditorium. This did not mean however that the event was any less lively! 15 groups of performers showcased their talents to the whole school and several groups received standing ovations.

The Performing Art Department are looking forward to another year of performances, trips and events in 19/20