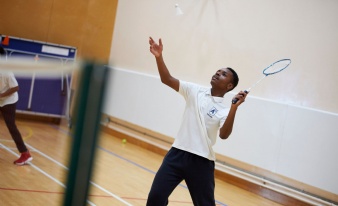 Please find below a report of the sports and activities that have occurred in the PE department during April & May.

Congratulations to the Year 7 girls’ Athletics squad who finished second overall in the Wandsworth Borough Championships – behind a talented squad from Putney High. Even though the return of medals was not so high in number, to finish second with just three medals is indication of the overall talent from this set of students. I do hope that Ashcroft can secure more medals next year with a little more experience and development. Well done to Zoe Agbonkonkon from 7t2 who achieved bronze medal in the shot put. And equal congratulations to Avni Bakre from 7t3 who went on to silver medal in the Javelin. And special reference to Lottie Harvey from 7t1 who secured our only Gold medal from years 7 and 8 with an impressive win in the 800 meters.

One of the performance of the year from the Year 9 boys’ Athletics squad who finished FIRST overall in the Wandsworth Borough Championships. This is an incredible achievement from a group of talented students with potential of an extremely good future in their chosen disciplines – and let’s not forget, against high competition within the borough. All students’ that medalled from Year 9 will now go on to compete in the London Championships and represent Wandsworth. It was a delight to watch Harvey Mansiamina’s 9t2 excellence in achieving gold medal in the 1500 meters – as it was just as rewarding to see the progress Alem Demiralp 9t3 has made to secure his silver medal in the same race – the first Ashcroft Gold/Silver of the day! A super technical display from Clayton Mytil 9t3 in the 80 meter hurdles won him gold medal – followed by Ashcroft’s next Gold/Silver combination with a silver medal from Mohamed Abass 9t1 in the same race. It didn’t end there for Mohamed, who went on to achieve bronze medal in the Triple Jump. Two more silver medals followed from the sprint events – Efe Peters 9t6 and Jacob Pongolati 9t2 demonstrating excellent levels of speed and technique in the 100 meter and 200 meter finals, respectively. The next dual medal came from the 300 meter final with Rajani Birch 9t6 and Duncan Seruwagi 9t5 finishing with silver and bronze medals, respectively. And finally, a wonderful finish to the Championships from an Ashcroft perspective with an impressive Gold medal in the 4 X 100 meter relay – the team which included Mohamed Abbas 9t1, Harvey Mansiamina 9t2, Jacob Pongolati 9t2 and Efe Peters 9t6.

Well done to Serena Mompondele from 10t7 who achieved a bronze medal in the 75 meter Hurdles at the Wandsworth Borough Championships. Huge congratulations to Amanda McFarlane from 10t6 who finished with silver medal in the 100 meter sprint – Amanda will now go on to represent Wandsworth in the London Championships. And finally, a special mention to Beyonce Otabil 10t4, Shalom Obijiaku 10t5, Amanda McFarlane 10t6 and Samara Da Costa 10t7 who finished in bronze position in the 4 X 100 meter relay.

After experiencing defeat in their first competitive Basketball match to Ark Putney Academy, I am pleased to report a win in their next game for the Years 7/8 boys’ Basketball team, with a victory over St Cecilia. An even start to the first quarter, but then Ashcroft’s skills’ and game management shone through to conclude in a 46 – 28 points win. The Most Valuable Player was Trishaun Charles 8t6 who scored a good number of baskets, with valuable contributions from Nosheirwan Jajja 8t6 and Fawad Sharif 8t7. Other members of the team included Josiah Barnor 8t5, Thiago Cafaro 8t6, Michael Villavicencio 7t3 and Joao Noguiero Silva 7t6. I look forward with anticipation to the U14 Borough Basketball tournament next year.

Huge congratulations to the Year 7 Netball team who secured first place in the finals of the South London League. After qualification from the pool, four schools were invited to the finals in a play-off format. The first game was a 10 – 8 victory versus Charter, which was then followed with a 11 – 5 victory over Graveney in the final – of particular note as Ashcroft experienced defeat in the pool stages against this school. Of special mention, is the attacking partnership between Lottie Dyer 7t7 and Emese Parti 7t5, but that is not to take anything away from the remainder of this wonderfully talented and unassuming group of students: Lottie Harvey 7t1, Katie Hughes 7t2, Avni Bakre, Lois Johnstone 7t4, Margaret Amara 7t5 and Angelica Obijiaku 7t6 – who have all been amazing for the PE department in their first year at the Academy.

Hard luck to the Year 7 boys’ Football team who suffered a 6 – 0 loss in the final of the Wandsworth Football League to Harris Academy Battersea. Regardless of the result, these students should be very proud of reaching the final – and of course, being crowned Borough Champions by winning the 6-a-side format earlier in the year. I look forward to next year in your 11-a-side adventures.

Hard luck to the Year 8 boys’ Football team who suffered a 2 – 0 loss in the final of the Wandsworth Football League to Ernest Bevin. Similarly, regardless of the result, these students should be very proud of reaching the final – and of course, being crowned Borough Champions by winning the 6-a-side format earlier in the year. I feel there is more to come from this group of students and especially if a stable team is available for selection!