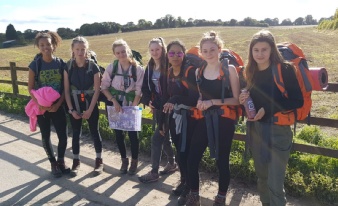 Well done to the Year 8 Football team who defeated Southfields in their first game of the season in the Wandsworth Football League. The score was convincing at 5 – 0 with goals coming from Kieron Ngongou 8t4 (2), Ishmael Bygrave 8t3 (2) and Milo Koba 8t1. The next game Ashcroft play is against Ark Putney Academy and hopefully Year 8 can maintain their positive start to the year.

Congratulations to the Year 9 Football team who beat Southfields 6 – 0 in the first game of the season in the Wandsworth Football League. Goals were scored by Duncan Seruwagi 9t5 (2), Ryan Madouri 9t5, Taher Chowdhury 9t6, Khalid Khahin 9t1 and Alem Demirale 9t3. Year 9 will face a more-challenging Harris Academy Battersea team in their next fixture.

A very positive start to the Wandsworth U16 Basketball competition with two victories against St John Bosco and Harris Academy Battersea. The second round will follow in November with another similar performance hopefully taking this team to the final in December. Congratulations to Muyiwa Obamakin 11t3, Fozey Abdalla 11t1, Kyle Vannucci 11t7, Giorgi Ugrekhelidze 11t3, Sidali Hammia 11t7 and Hanan Manan 11t5.

September saw a group of 40 Year 11 students complete the ‘expedition’ section of the Duke of Edinburgh Award at Box Hill in Dorking. Students’ were required to demonstrate skills such as camp craft and map-reading after an enduring 25 kilometre walk. To conclude the award, these students’ will now need to complete volunteering, physical and a skill section of the assessment criteria to complete a valuable and worthwhile experience that will contribute to their life-long attributes, memories and CV. I would also like to mention and say thank you to the members of staff who gave up their weekend and ‘comforts’ to assist groups of students navigating the routes of the South Downs: Miss Haviland, Miss Cooksley, Miss Peterson, Mr Henderson, Miss Henry, Miss Bishop, Miss Bullers and the PE department. In particular, well done and thank you to Mr Dooley for the enthusiasm and commitment that organising an award of this nature requires, and the successful return of both students’ and staff!

I look forward to hopefully being able to report similar successes in October where students from Year 7 – 13 will participate in more Basketball and Football, but also Volleyball, Netball and Cross-Country.