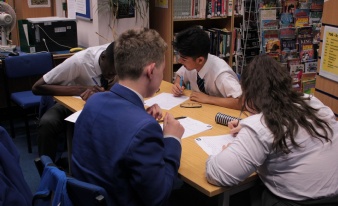 Fantastic debating workshop held this week with a representative from the Debate Mate organisation.

Year 9 students were eager to learn the skills on how to reach an audience to debate their views. After a coaching session from the Debate Mate representative they split into small groups to put together their arguments either for or against 'This house believes the Goverment should be allowed to spy on citizens phone calls, texts and emails'.